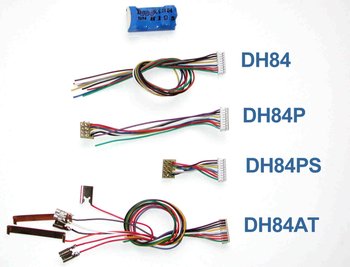 Note: DH82 & DN92 decoders, some of the very first decoders produced by Digitrax used a different wiring color code.  Please check decoder spec sheets for the wire colors that were used with these decoders.

FX decoders will blink the loco's lights when power is first applied to the decoder to warn you of a short circuit in your installation. If you see the lights blinking, immediately remove the loco from the track, locate the short circuit and correct the problem before proceeding. Do not leave the loco on the track with blinking lights because eventually, the decoder will become overloaded and be damaged. If a short occurs after initial power up, the lights will not blink so, it is important to secure the leads inside the loco once the installation is complete to prevent them from coming loose during normal operation and creating a short. For board decoders, it is important to follow the instructions for installing insulating tape inside the loco to prevent shorts during operation caused by the decoder board shifting inside the engine.

The following is an explanation of how CVs that control FX functions work.  This information is to be used ONLY by FX decoders.  FX3 decoders use different CVs to control functiion outputs.

Decoders with FX features have 4 user configurable, independent special effects generators.  These are set up by programming CV values as described below.

Some decoders do not have function wires attached.  See the specific decoder instructions to determine which "pad" on the decoder is for each function.  Use thin wire or wire saved during previous decoder installations to solder function wires to the pads associated with the function you want to use.

Table IVa FX generators are controlled by CVs 49 to 61

2.  Each FX effect has a CV value that generates the FX effect you want and controls how the effect works with respect to locomotive direction and the head light (F0) function.

Table IVb  The second digit of the FX CV value determines which type of FX effect will be generated.

Table IVc  The first digit of the FX CV value determines how the effect generated will behave.  For example, two strobe lights can be set up to flash alternately by setting one to phase A and the other to phase B.  The strobes can also be set up to be on when the loco is moving forward and off when moving backward.

3.  Program the FX CV value from step 2 to the FX CV identified in step 1.

If you are using the PR1 Computer programmer, a special FX set up section is available where you can just "point and click" to set up the effects you want to use.  The software lets you select which function lead and which FX feature you want from a menu so you don' have to use the tables above to determine which CV or CV value to use.

4.   You can repeat steps 1, 2 and 3 to set up a total of 4 FX effects on any 4 function leads you choose.  If you want any function lead to remain a simple on/off lead, leave it programmed to the factory default of CV value 00.

If your decoder has more than 4 function leads, you can set up only 4 FX effects and the other function leads will be simply on/off functions.

CV62 lets you control the rate and keep-alive brightness for each FX effect you set up.  The CV value for CV62 is made up of 2 digits, the first digit and the second digit.

The first digit controls the keep alive/baseline off voltage for incandescent lamps.  This value should be between 0 and F.  A value of 0 gives no keep alive and a value of F gives maximum keep alive.  Values between the high and low allow you to vary whether the lamp actually goes off between light pulses or whether it stays on very dimly or more brightly.  (If you are using LEDs, the first digit for CV62 should be 0.)

The second digit controls the rate of the FX effects programmed.  This value should be between 0 and F.  A value of 0 gives a fast rate and a value of F gives a slow rate of operation.  We recommend you start with a 4 and adjust it up or down until you get the effect you are looking for.

If you are using the ditch light effect in conjunction with F2, CV63 lets you set up a hold over time to control how long the ditch lights continue to blink after F2 turned off by releasing the key on the throttle.  Remember that F2 is a momentary key on most Digitrax throttles that will keep function 2 on as long as you hold the key down and then turn function 2 off when you release the key.  This allows the ditch lights to be on steady during regular operation and to begin alternate flashing when F2 (usually the horn) is activated and to continue flashing alternately for a predetermined length of time after F2 is released; just like the prototype.  A value of 00 yields no hold over time, a value of 40 yields a realistic time of about 5 seconds.  A value of 255 (xFF hex) yields about 20 seconds hold over time.

Any function lead on the decoder can be set up for any FX effect by programming its associated FX CV to the appropriate FX CV value.  For example, if CV53, the FX CV for F3, is programmed with an FX CV value of 02, the brown F3 function lead will be a Mars light when F3 is turned on for this decoder address and the decoder's direction is forward.

If you set up more than 4 effects to the output leads, the effects selected after effect 4 will be the same as the 4th effect selected, assuming the first effect was set up on CV49, the second on CV50, the third on CV51 and the fourth on CV52.  An FX CV Value of 00 will set up the function lead as a standard on/off function lead with no FX effects generated.

Common problems with FX set up are:

Trying to program a decoder for FX when the decoder does not support FX.  Be sure the decoder you are installing has FX features.  Digitrax introduced FX in the summer of 1995 so if your decoder was made before then it does not have FX capability.  Since 1995 all Digitrax premium decoders have included FX.  Digitrax standard and economy decoders do not have FX features.

FX effects don't work as expected.  Review the qualifiers you set up for the effect.  For example, if the effect is set up to come on only when F1 and F0 are active and the loco is headed in the forward direction, be sure you have met those conditions.

This product is also included as part of the following set: