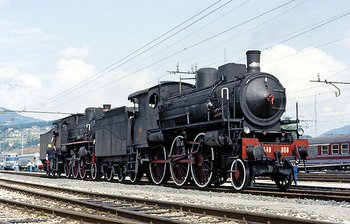 The Class 746 originated from the need of a fast locomotive that, while having similar performance to the 'Pacific' Class 690, could have a lower axle load and therefore wider route availability; this could be achieved by adding another driving axle, and accepting a lower top speed (reverting to a leading Italian bogie). To achieve high performance, it was decided to adopt a symmetric compound engine (a Von Borries design), with the two inside high pressure (HP) cylinders having the motion for their valves derived from the outside Walschaerts valve gear; this was unusual for Italian locomotive practice, where the compound engine had been shelved once the superheating technology had become available in the 1910s.

Forty locomotives were ordered to the Ernesto Breda, which produced them in 1922, and then ten more in 1926; Gio. Ansaldo & C. built ten more, fitted with Caprotti valve gear, in the same years. The latter were initially classified as Class 747, but in 1930 they were reclassified as the 746.100-110 subclass.

Unless otherwise specified, all standard Digitrax CV variables must be modified
in order to get Loco's best performances (CV2, CV3, CV4 etc.etc.)