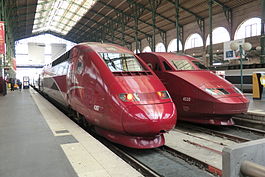 The Thalys PBKA is a high-speed train derived from the French TGV. It operates the Thalys service between Paris, Brussels, Cologne (German: Köln) and Amsterdam, forming the abbreviation PBKA.

Unlike Thalys PBA sets, the PBKA sets were built exclusively for the Thalys service. Their motor cars are technologically similar to those of TGV Duplex sets, but the trains do not feature bi-level carriages. They have eight carriages and are 200 m (656 ft) long, weighing a total of 385 tonnes. They have a capacity of 377 seats.

Seventeen trains were ordered: nine by SNCB/NMBS, six by SNCF and two by NS. Deutsche Bahn contributed to financing two of the SNCB sets.

There is 1 Sound Project for this Locomotive
French Thalys 8 bit project by Barry's Bits, added on Nov. 18, 2013
Show release notes