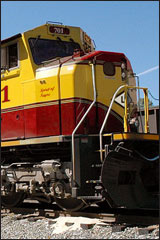 Although mechanically similar to earlier SD70 units, the SD70ACe rides on a new underframe and uses mostly new sheet metal above the frame. Electrical cables and air lines have been routed beneath the walkways on opposite sides, allowing easier access for maintenance. Continuing the designs of the SD80 and SD90 series, the radiator on the locomotive is nearly as wide as the cab, the center hood section is a step down below the roofline, and the dynamic brakes have been moved to the rear of the hood. The SD70ACe uses the cab design of late-model SD90MAC-H units, which uses rectangular window glass and is externally different from the two cab variations used on earlier SD70M and SD70MAC units. In 2008, EMD standardized the isolated cab on subsequent SD70ACe's after non-isolated cab units were restricted from leading on BNSF Railway due to excessive cab vibration.

There is 1 Sound Project for this Locomotive
sd70ace 8 bit project by Digitrax Inc., added on July 14, 2011

This sound recording courtesy of UP Steam Heritage program (UP3985 had WP#1983 as 'helper' and recorded by AJ Ireland Sept 2005) and Brian Marsh, Overland Models for supplemental recordings at Council Bluffs.

Note: This SD70ace prime mover has significant low-frequency components at idle and low notch settings, so the speaker enclosures should be as large as possible behind the diaphragm to extend adequate frequency response below e.g. 300Hz. This will ensure a more "full" sound that does not appear thin or "tinny".

Each engine recorded has a distinct 'personality', so a particular locomotive example may sound slightly different due to unique e.g. tappet, crank-rate shell vibrations and exhaust-stack differences. Horns and bells are often moved between locomotives, and some roads may change/upgrade prime-movers, or change a normally aspirated engine with turbo-chargers etc.