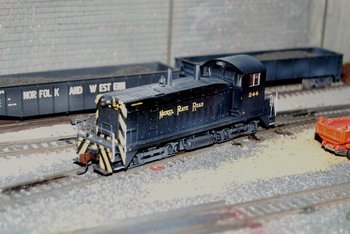 Visually, the 567C may be distinguished from earlier models by the presence of round (instead of square) handholes.

There is 1 Sound Project for this Locomotive
nw2 8 bit project by John McMasters, added on May 9, 2013
Show release notes

As with all 567 motor sounds the install has to have very good speaker and amplifier configured. The motor is just too quiet otherwise.