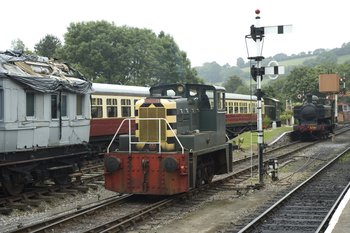 All sounds recorded by AJ Ireland at Buckfastleigh, Devon, June 2007.

Note: This BR_Yorkie prime mover has significant low-frequency components at idle and low throttle settings, so the speaker enclosures should be as large as possible behind the diaphragm to extend adequate frequency response below e.g. 300Hz. This will ensure a more "full" sound that does not appear thin or "tinny".

Each engine we have recorded has a distinct 'personality', so a particular locomotive example may sound slightly different due to unique e.g. tappet, crank-rate shell vibrations and exhaust-stack differences. Horns and bells are often moved between locomotives, and some roads may change/upgrade prime-movers, or change a normally aspirated engine with turbo-chargers etc.

This SDF is approximate for UK. For example, the F7 crossing horn-blow is not the UK practice, and these locos do not have an F2/bell. UK carriage (car) brakes employ a vacuum, unlike the US practice of the Westinghouse air pressure driven brake cylinders. (UK Brake-stands make "sucking" instead of 'blowing' sounds)

The term British Rail is typically an adjective in these UK locomotive schemes, since the original railway running the engines may not have been the modern era "British Rail" company, though some units are painted in this livery.

There is 1 Sound Project for this Locomotive
BR_Yorkie 8 bit project by Digitrax Inc., added on July 14, 2011