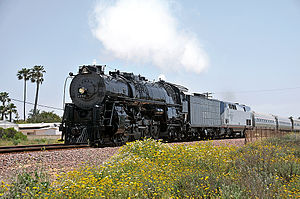 Under the Whyte notation for the classification of steam locomotives, 4-8-4 represents the wheel arrangement of four leading wheels on two axles, eight powered and coupled driving wheels on four axles and four trailing wheels on two axles. The type was first used by the Northern Pacific Railway and is consequently most commonly known as a Northern.

The AT&SF used its 4-8-4s for passenger service. Since its main line stretching over 2200 miles (Chicago to California), the AT&SF had a real need for excellent motive power.

The last group of 30 were built in 1943 and 1944. Wartime shortages of material resulted in ordinary metals being used for their construction. As a result, they were the heaviest Northerns ever built. They out weighed their nearest rivals by over 2000 pounds. This group was known as Class 2900 and included road numbers 2900 through 2929.

There is 1 Sound Project for this Locomotive
atsf3776 8 bit project by The Brass Caboose, added on July 5, 2012