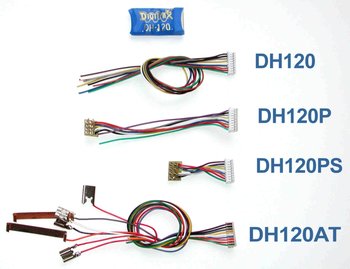 The decoder end of the harness plugs in to a DTX9 socket allowing the decoder to be detached from the harness.

The locomotive end of the harness allows for use with all locomotives with a DCC medium 8 pin plug socket.

The green wire is not attached to the DCC medium plug but is available for use as an additional wired function lead.