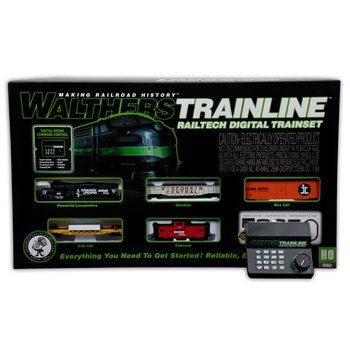 The WTL12 is a Command Station, Booster, Throttle and Sound System that is designed by Digitrax and sold as part of the WalthersTrainline RailTech train set. It offers simplified train operation as part of a train set however the WTL12 is fully expandable with the complete line of Digitrax DCC products.  It could also make a great addition to your existing Digitrax DCC system.

To access the advanced and expandability features of your WTL12 please review the links under supporting documentation to the right.

The WTL12 is sold as part of the WalthersTrainline RailTech train set which includes:

·         Constant brightness lighting. Headlights can be directional or independently controlled (depending on decoder).

·         Use WTL12 as a starting point for your Digitrax LocoNet System, then add components.

·         Use WTL12 as an expansion set with Digitrax equipment you already have installed.

The WTL12 is only available from Walthers and their dealers as part of the WalthersTrainline RailTech Digitral train set.  For additional details visit the Walthers website at www.walthers.com .